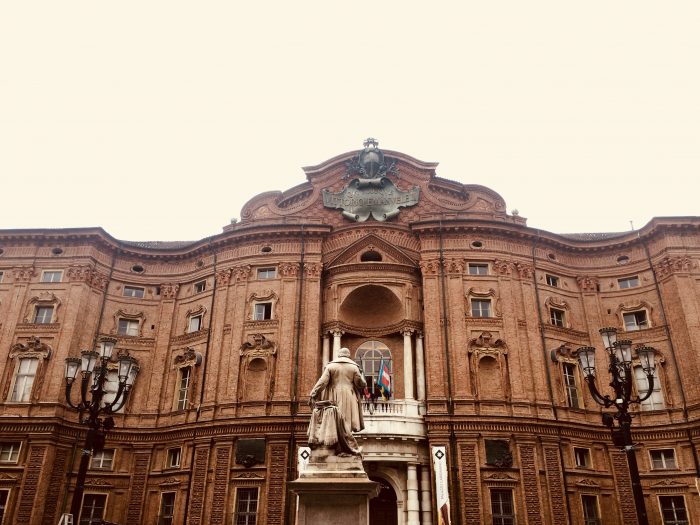 Turin in a day: an itinerary to make the most of it

Visiting Turin in one day? Of course you can! To allow you to make the most of the little time you’ll spend in this beautiful city, we’ve prepared a wonderful itinerary. Follow us for an unforgettable walk through centuries, in the cradle of modern Italy!

When deciding where to go to visit Italy, one often leans towards Florence, Rome, Milan, Venice or the Amalfi coast. For good reasons, as it is true that these places are sublime. (And in case you’re wondering: of course we will tell you all about these trips on the blog soon).

Too often, we pass on Turin, a city of northern Italy surrounded by mountains and located near the Franco-Italian border.

And what a mistake this is!

Indeed, Turin is a beautiful city that has a lot to offer. In Turin, food lovers will find exceptional dishes, history nerds (I am one of them so it’s ok to use the word “nerd”) some incredible museums, architecture enthusiasts will marvel at every street corner. Not to mention those soccer fanatics, who will jump up and down at the idea of a pilgrimage to the Juventus stadium. In Turin, there is really something for everyone, and the more I discover Monsieur Chéri’s hometown, the more I fall in love with it.

Around Via Roma and Via Lagrange

Start your stroll at the Porta Nuova Station. Take Via Roma and head North. If you are driving, park in the underground parking of Porta Nuova. Be careful though, because it stretches for miles under the city so make sure to remember your exit. From there, turn right onto Via Seconda Frola. I like to stop at Costadoro Coffee Lab Diamante (which has wifi) to have a marocchino in which they put a touch of Nutella. It horrifies Mr. Chéri but I find it decadently yummy.

If you like shopping, stop by the Rinascente, the equivalent of your Macy’s, or indulge yourself in the luxury boutiques of Via Lagrange. Take Via Lagrande and keep heading North. You will pass by Gobino (on your right), famous for its chocolate. That’s pretty decadent too!!!

A few steps away you’ll find the church San Filippo Neri. A little sad inside but I really liked its gate. 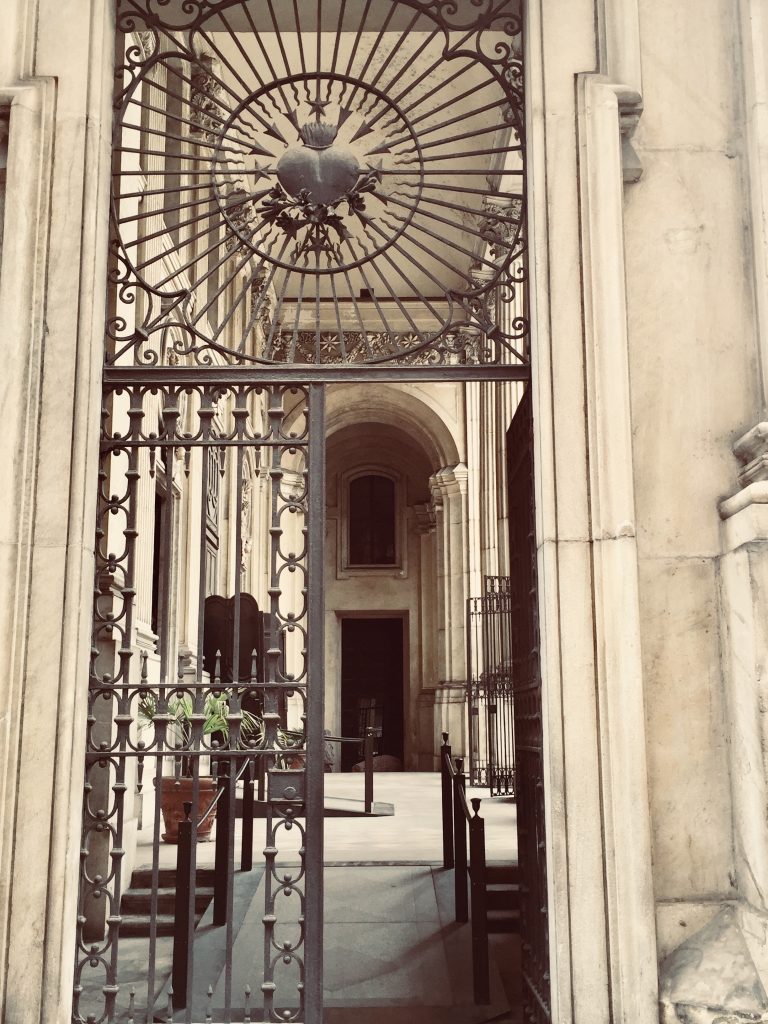 On the other side of the street, do not miss the Museo Egizio. It is one of the most beautiful museums dedicated to Egypt in the world and the second largest one after Cairo’s. It is, rightly so, the pride of the city. After visiting, go back to Via Lagrange until you reach Piazza Carignano.

Piazza Carignano is without any doubt my favorite square in Turin. Why ? Because it has everything. Fine cuisine, delicate treats, beautiful buildings, culture, history… For me, it’s the quintessence of Turin.

If you fancy a break, head to Farmacia del Cambio, a pastry shop that has taken refuge in a former pharmacy. I love the atmosphere of this place. 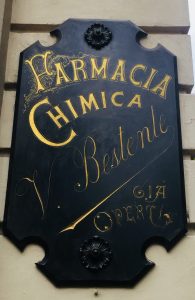 Another great place for an ice cream, try Pepino. It’s here that the ice cream on a stick and covered in chocolate was born. It’s called a pinguino. Wonderful and typically local flavors include hazelnut from Piemonte, gianduja or violet.

In the evening, the Cavour bar and the Ristorante del Cambio are good and traditional choices. First, because the restaurant was the place from which Cavour watched what was going on in the Subalpine Parliament – the first Italian parliament – on the other side of the square. Secondly because it is a gourmet restaurant in a refined and quite Piemontese atmosphere.  In this square you will also find the Teatro Carignano. 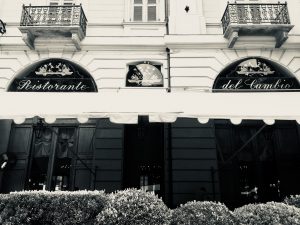 But of course, it is the huge and beautiful building East of the square that will catch all of your attention. Today, it is home to the Museo Nazionale del Risorgimento, but it used to be a royal palace before becoming the Italian Parliament. The museum is on my to-do list for my next trip. I heard it’s quite amazing. 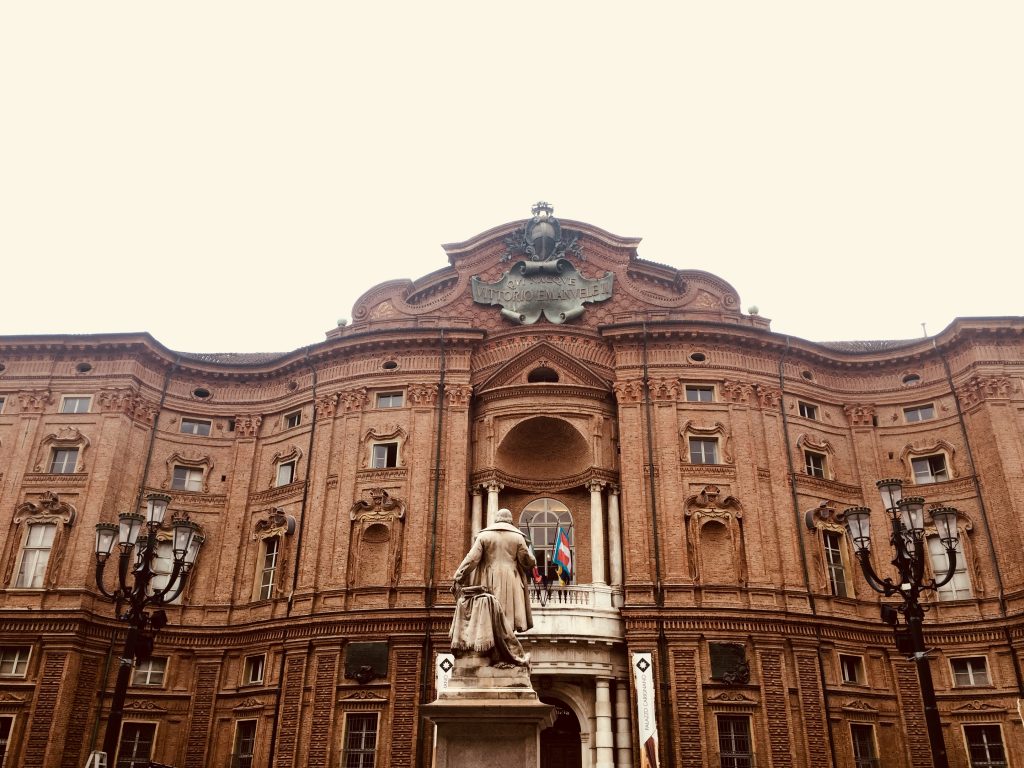 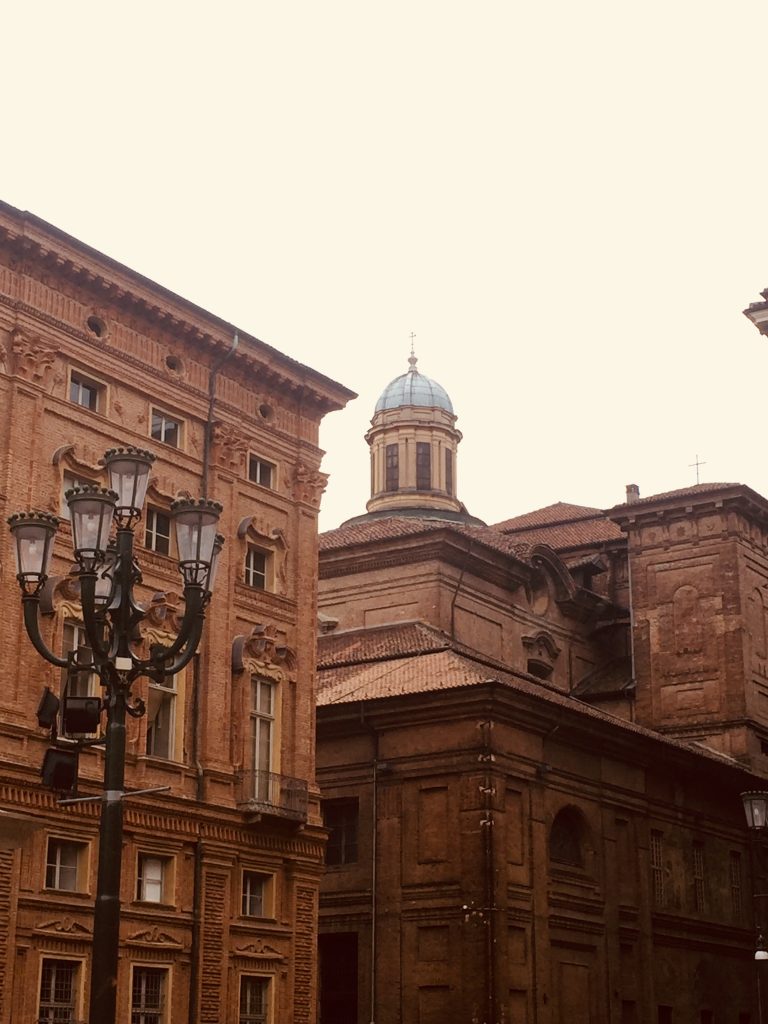 Then, turn left onto Via Battisti then right on Via Roma. This large street has recently been pedestrianized. My advice is the following: go in the middle of the road and face the South. The perspective is very nice. In the background, you can see the Porta Nuova station. And on both sides, miles of arcades. Head North towards Piazza Castello. 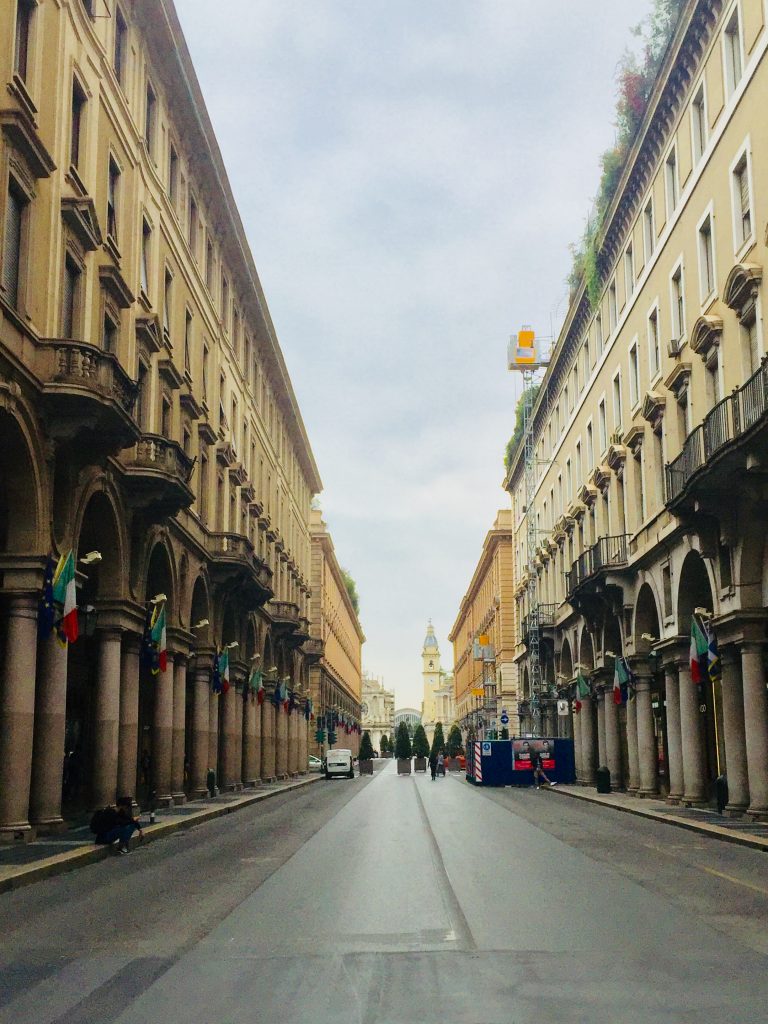 When you get to Piazza Castello, you may be overwhelmed. Your eyes won’t know where to look first. Don’t worry, that happens to everyone, me included.To your right (always looking North), you’ll see the Palazzo Madama, in front of you, the Royal Palace, on your left from the back to the front, la Chiesa San Lorenzo and Via Garibaldi. Behind you, admire the curve of Via Micca and its old tramway. Then, look up. The rather awful Fascist-style building is called Mussolini’s finger. 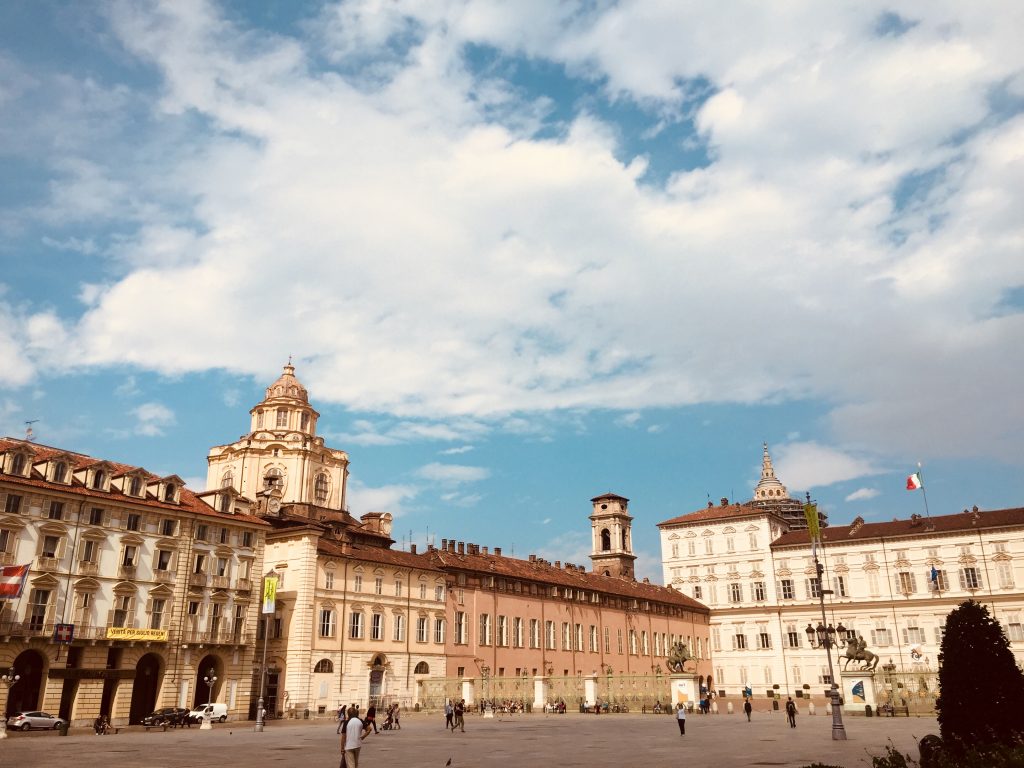 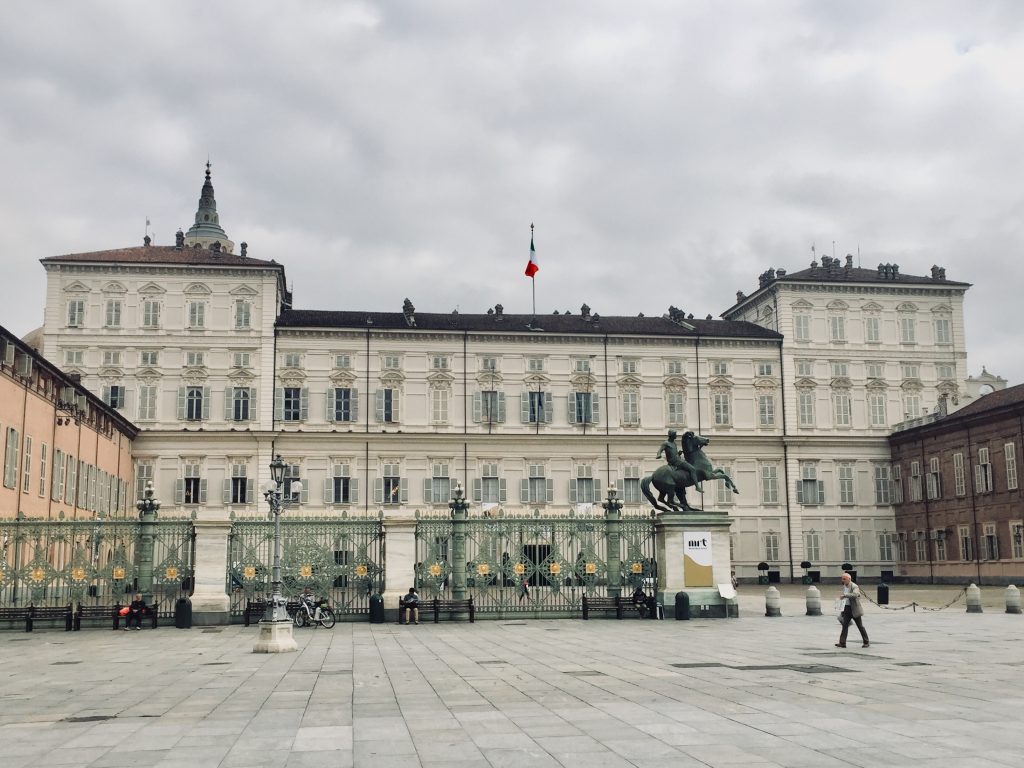 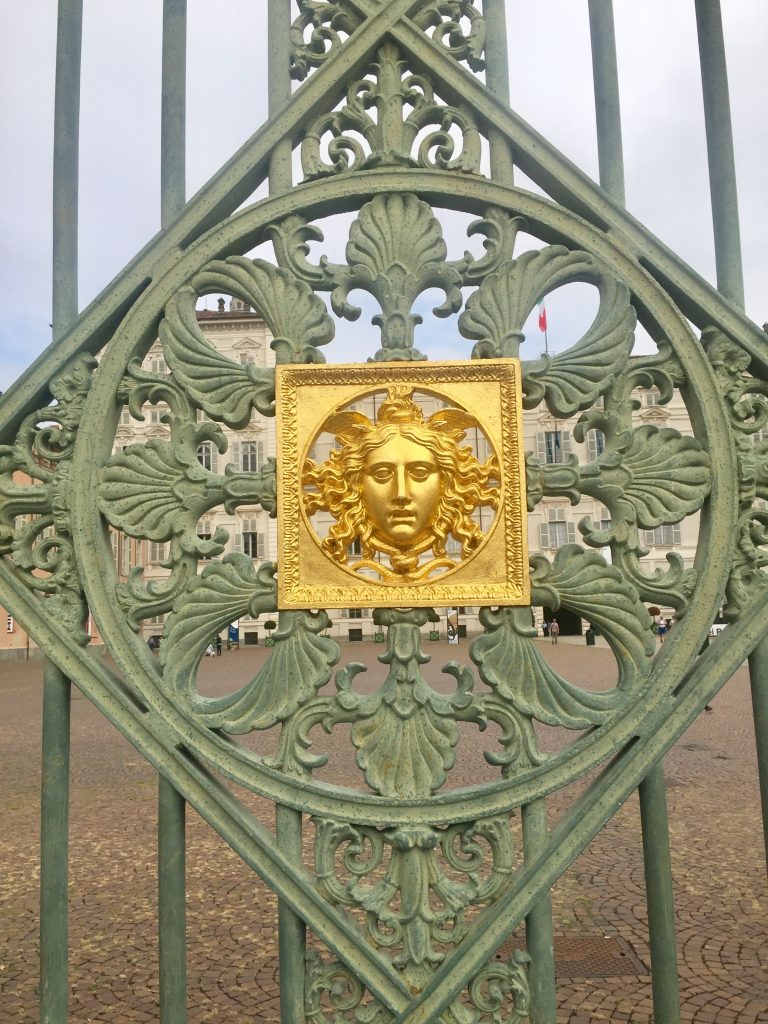 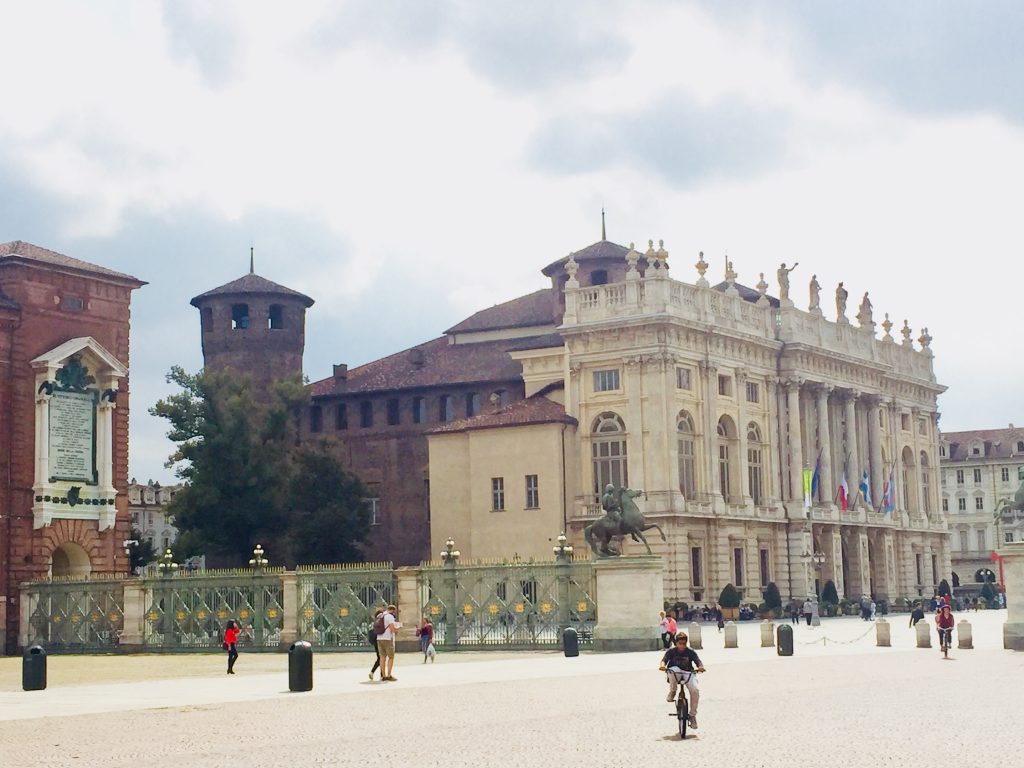 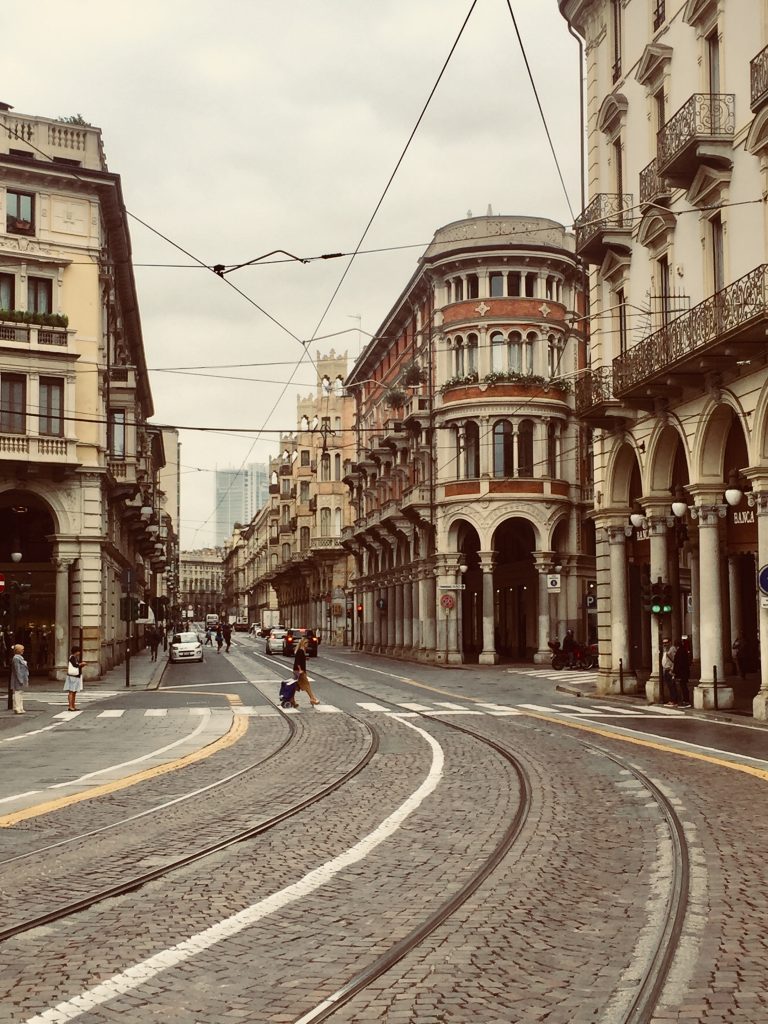 If you are in Turin on a weekend, make sure to ask around as some palaces, including the Palazzo Madama, offer the opportunity to have a “royal tea time” (merenda reale). By tea time, understand hot chocolate time. You will have the pleasure of enjoying various types of sweets once served at the Court of Savoie.

Seen from Piazzo Castello, the church does not look like anything. In fact, it doesn’t even have a proper facade. Yet, not giving San Lorenzo a proper look would be a big mistake. For me, it was a real favorite.

Volunteer guides offer free and wonderful tours. I loved how passionate these volunteers are about “their” church and I highly recommend these tours. First, you’ll hear about the history of the building and the art of Guarini, its architect. Then, in a small room, you’ll get to see a  full-size replica of the Shroud and learn a little more about it. If you do this visit, no need to see the Shroud museum. Besides, contrary to what its name seems to suggest, the Shroud is not preserved in this museum but in the Duomo. 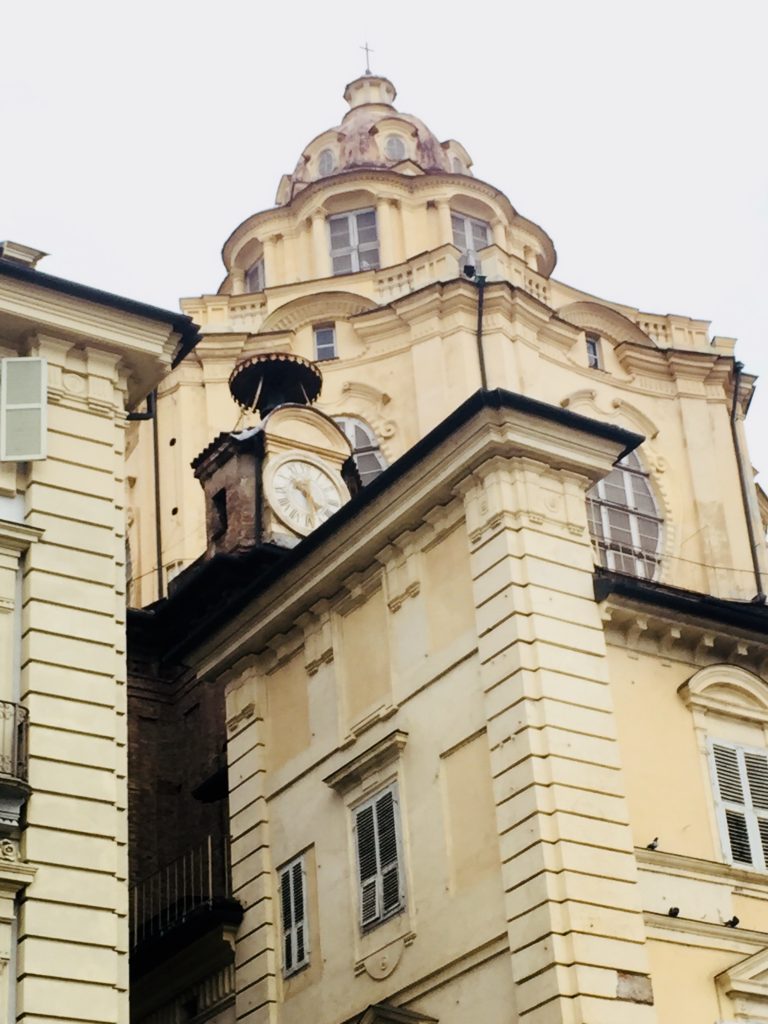 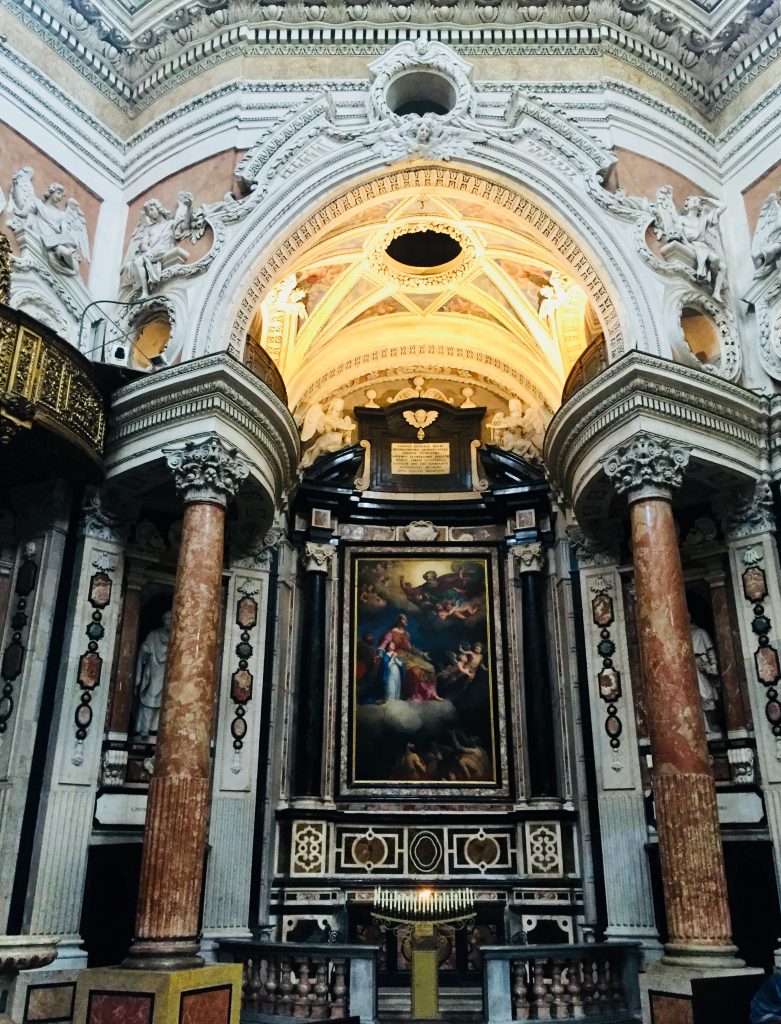 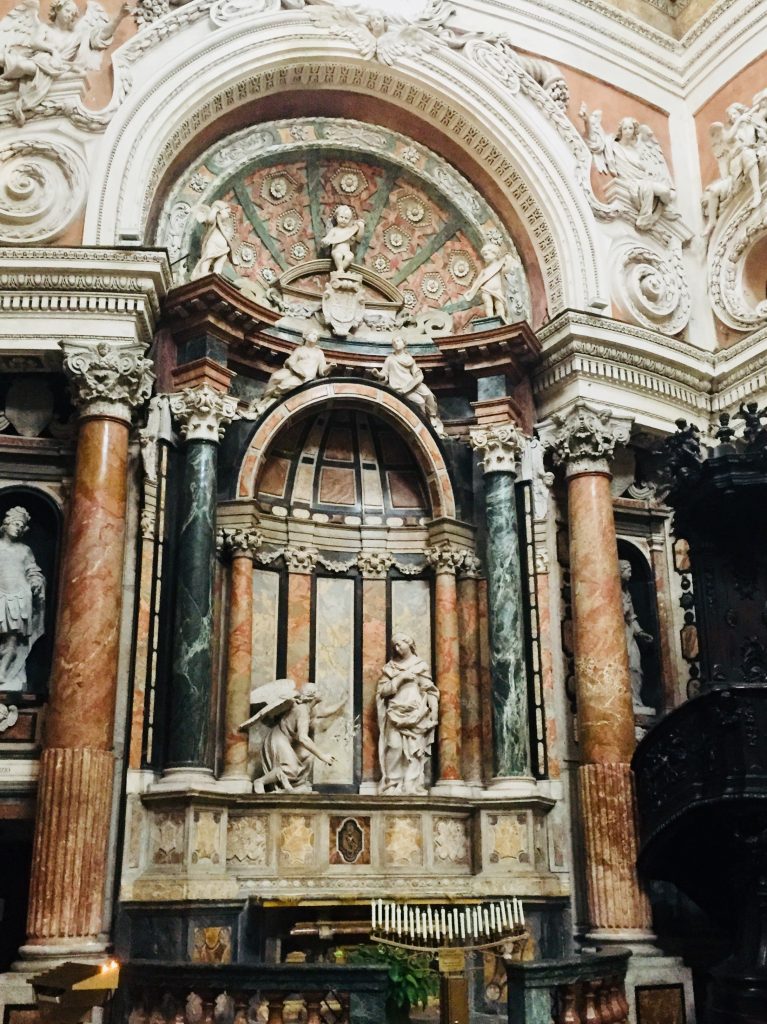 After that, turn left, pass through the gates of the royal palace. Make a left in a small passage going around the Duomo by the South. The Duomo looks ok, although not spectacular.

A few steps away, you are at Porta Palatina, a vestige of the Roman era. For lunch, I recommend a stop on an adorable little square, Largo IV Marzo, or a little further Piazza della Consolata. 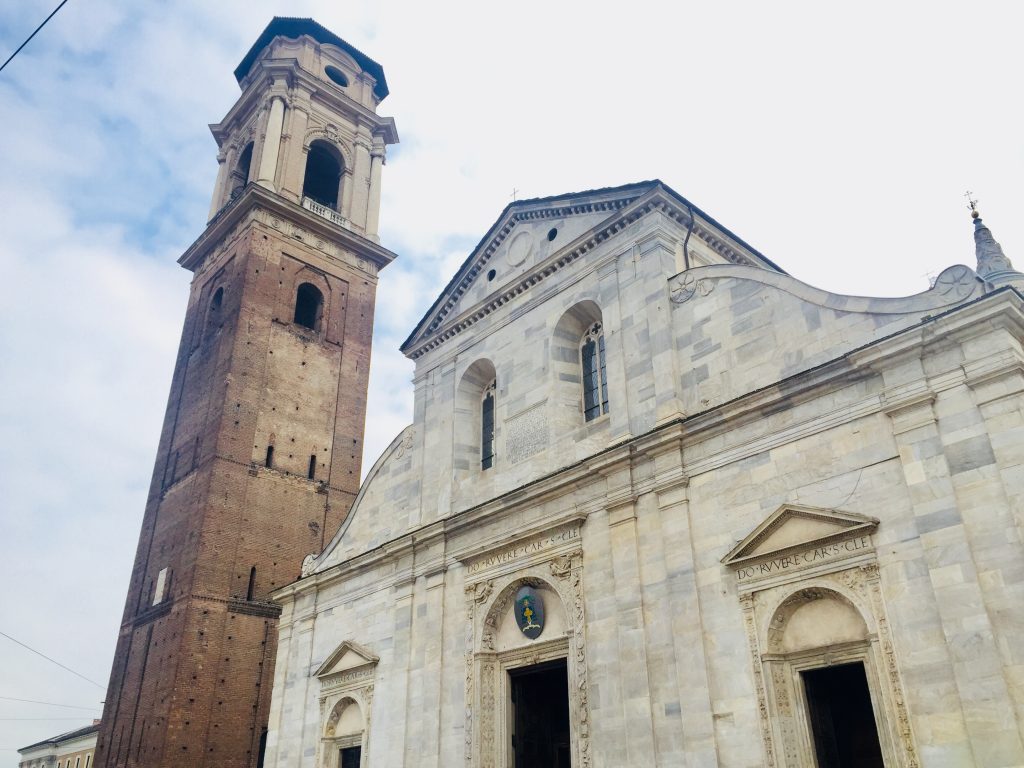 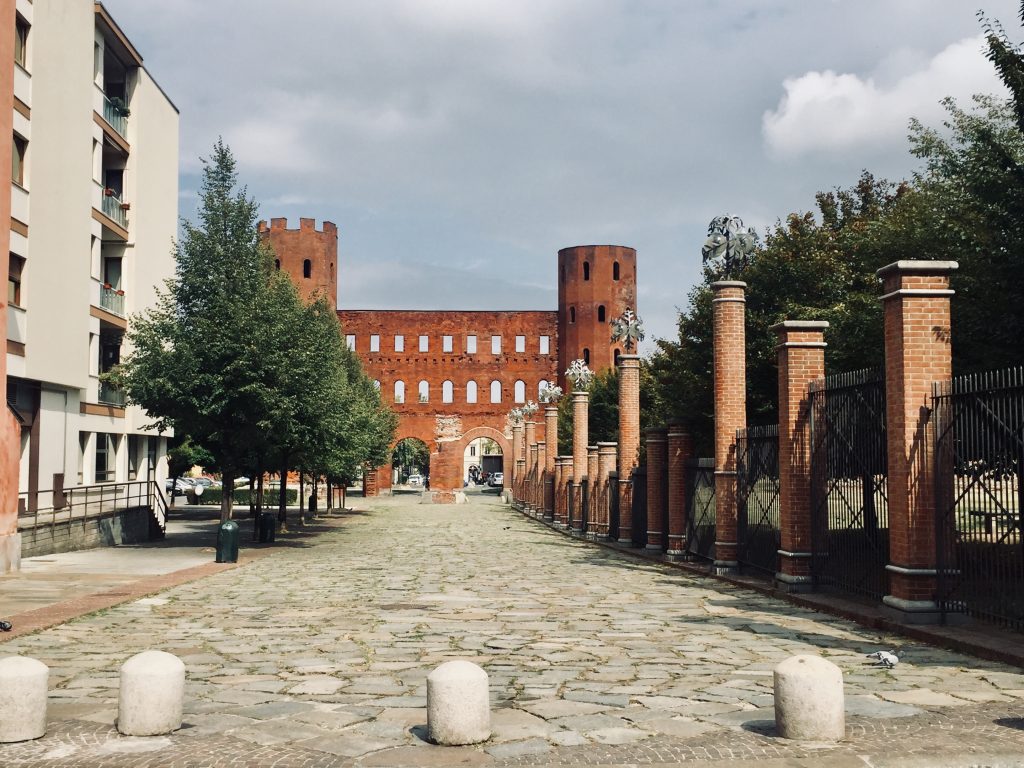 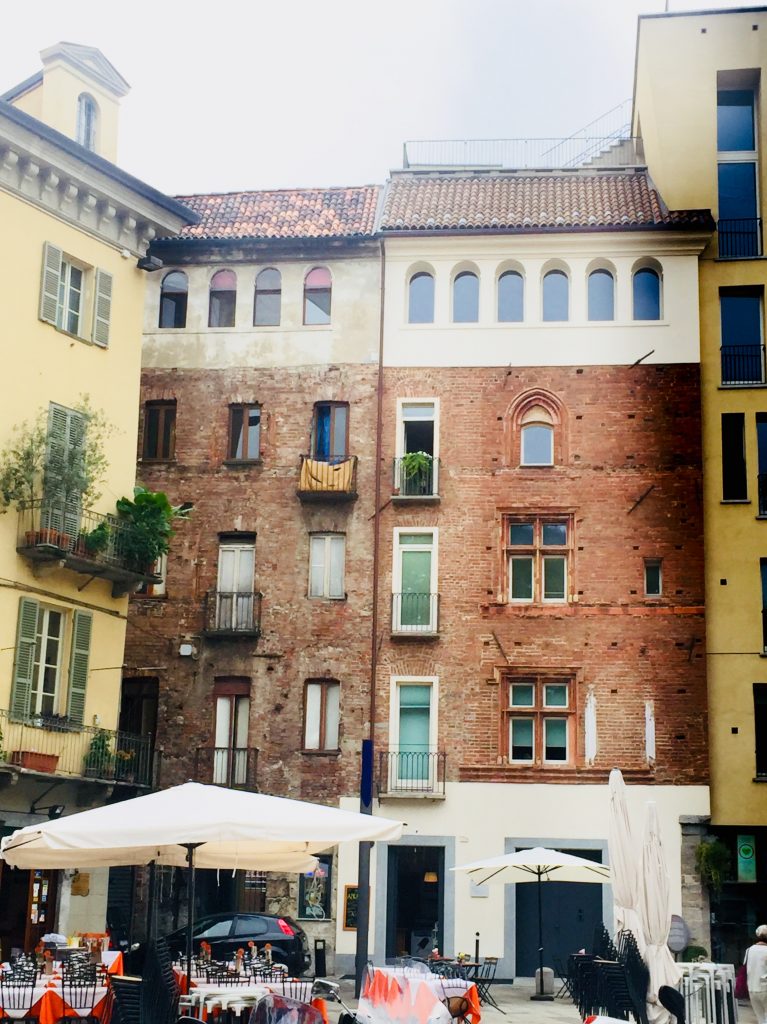 Piazza della Consolata is a must. For the church (veryyyyy baroque!) but also for the legendary Al Bicerin café. Take a seat inside and order… a Bicerin! This hot beverage is a subtle blend of hot chocolate, coffee and cream. The texture is a little lighter than an old-fashioned French hot chocolate but the taste is rich and delicate at the same time. I loved it! Plus, it’s a historical place that has existed since 1763. 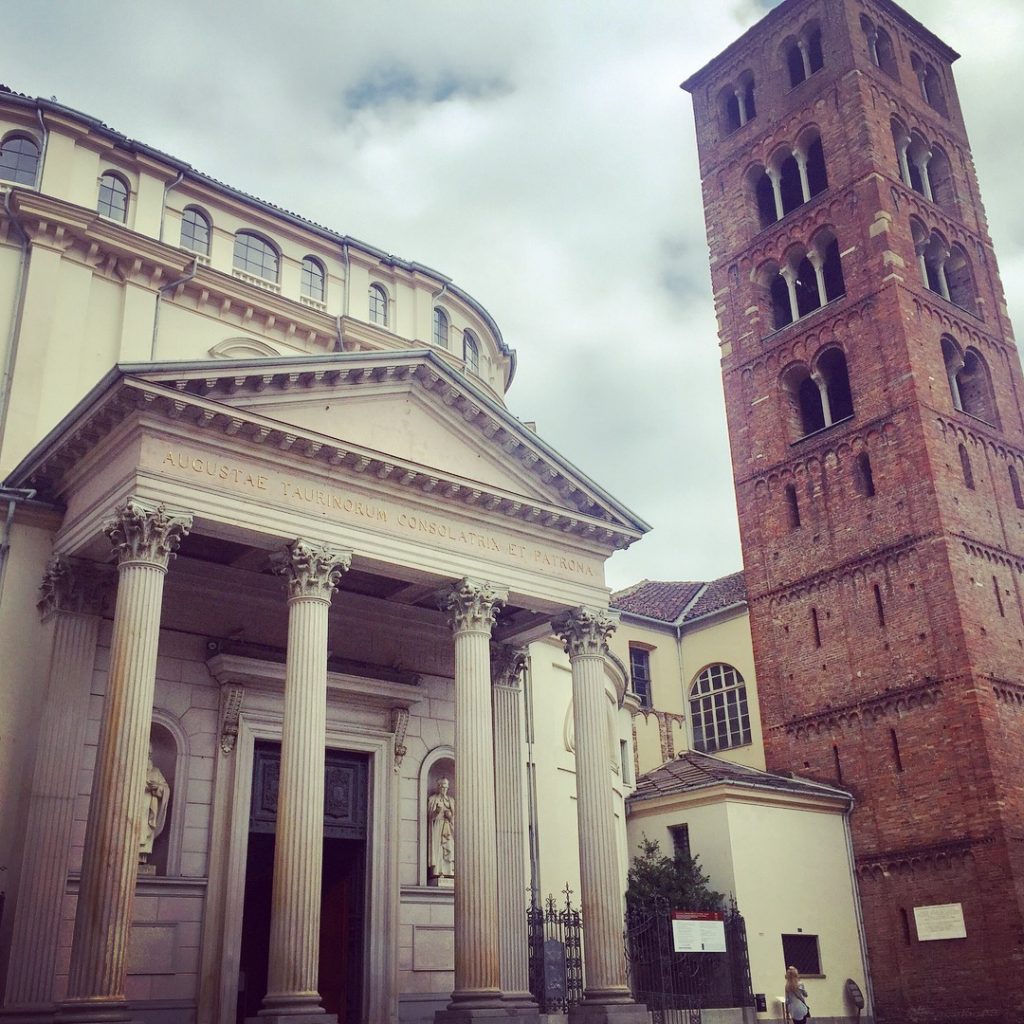 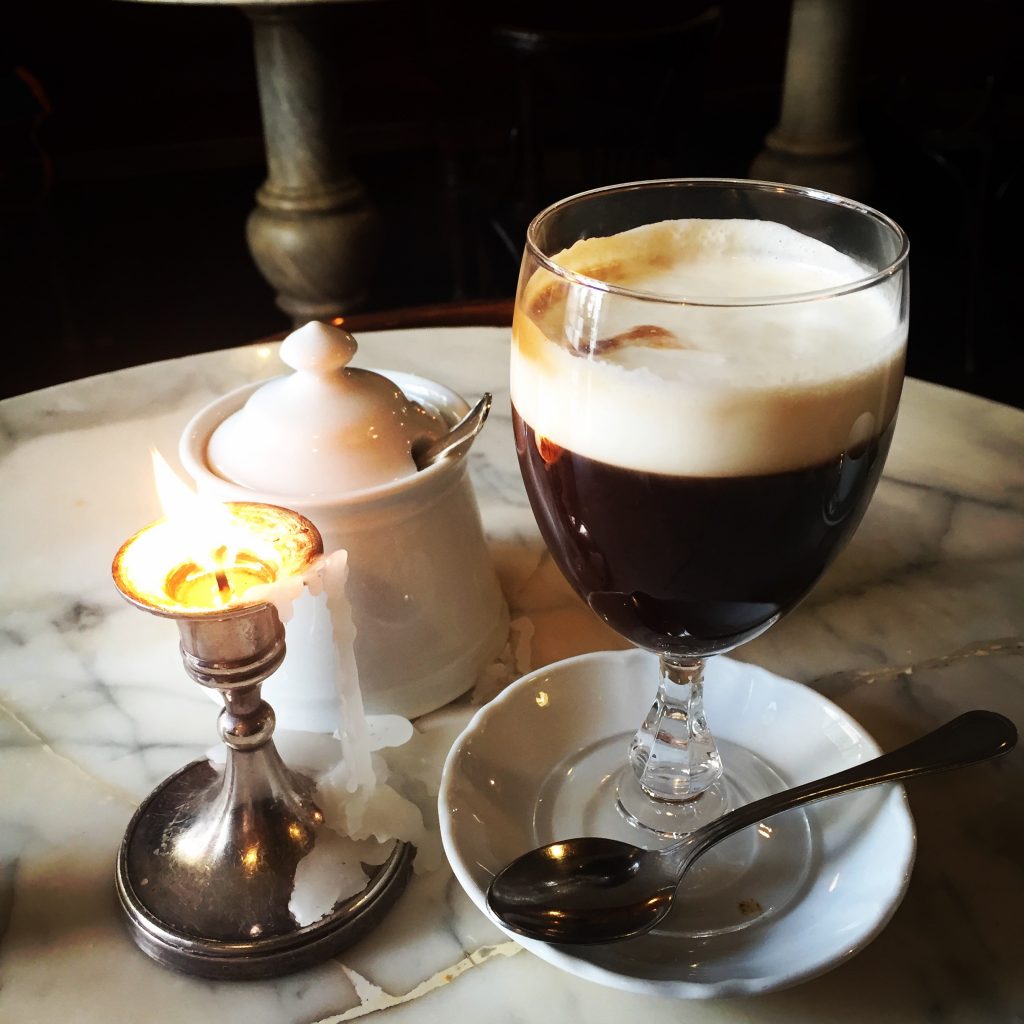 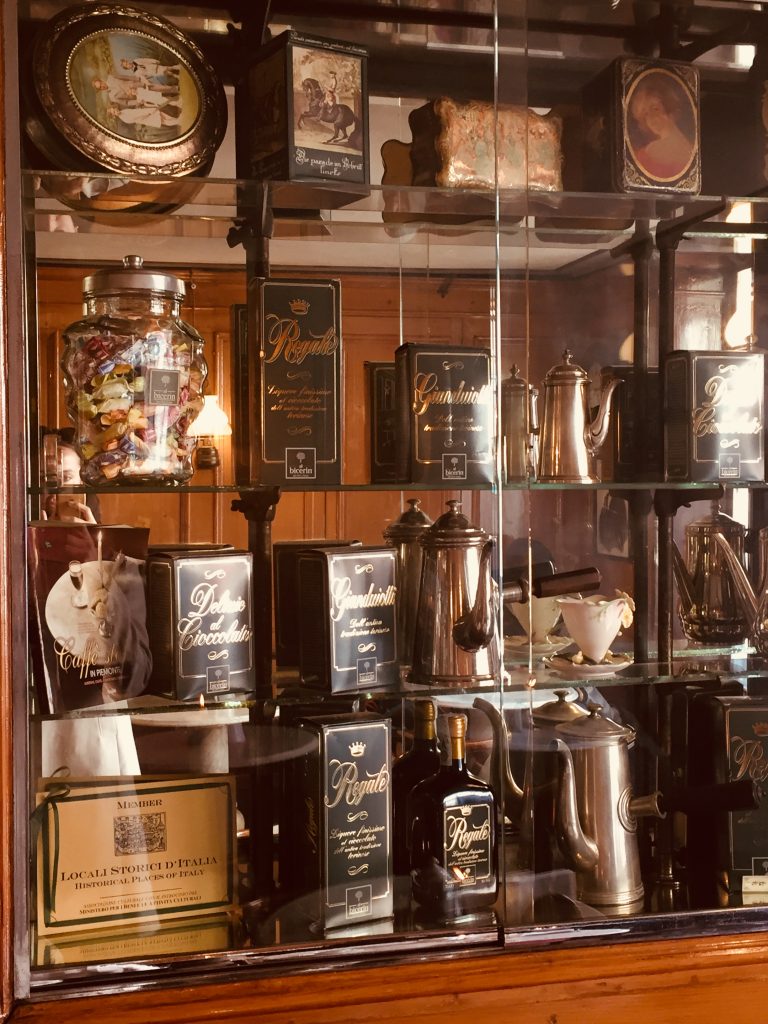 After sipping your Bicerin in the warm atmosphere of Al Bicerin, it’s now time to start walking again. Take a stroll around the small ancient streets of Quadrilatero Romano, walk in front of the Palazzo Civico (city hall), then head back to Piazza Castello on Via Palazzo di Città. Why ? Because you can see funny wooden shopping windows in the pillars of the arcades. 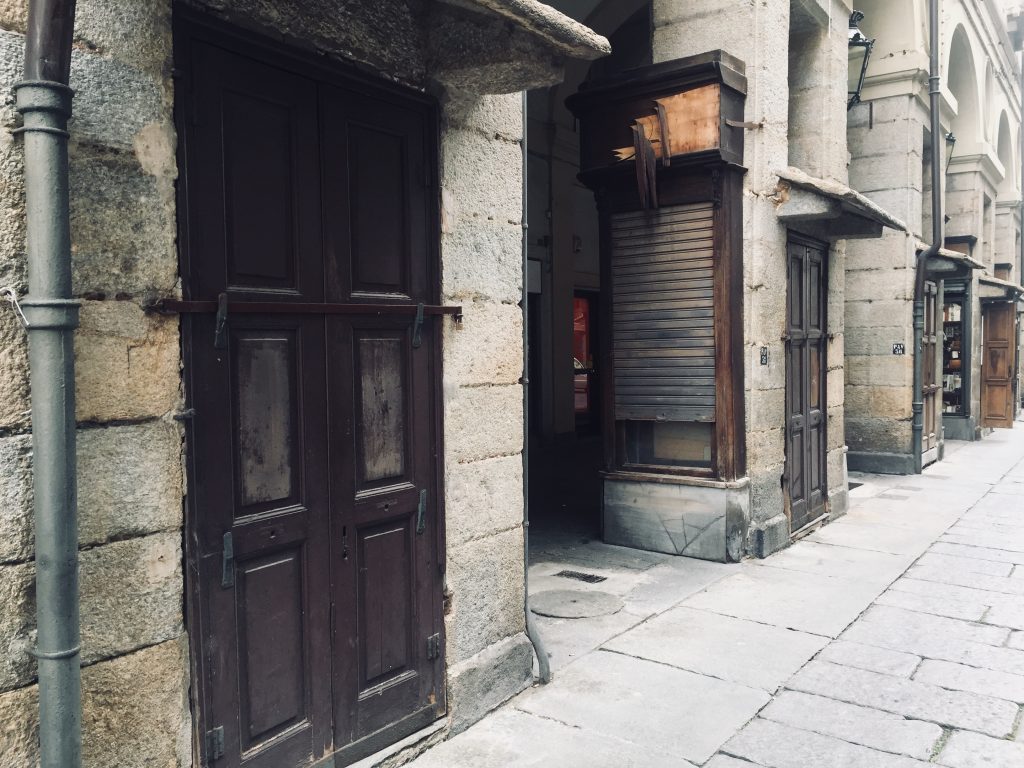 From Piazza Castello, take Via Po to Baratti & Milano, a real institution (yes, more chocolate awaits you). For the record, the first time Mr. Chéri came to my house, he showed up with a huge box of Baratti & Milano and a mocha Bialetti (cliché but much appreciated 😉 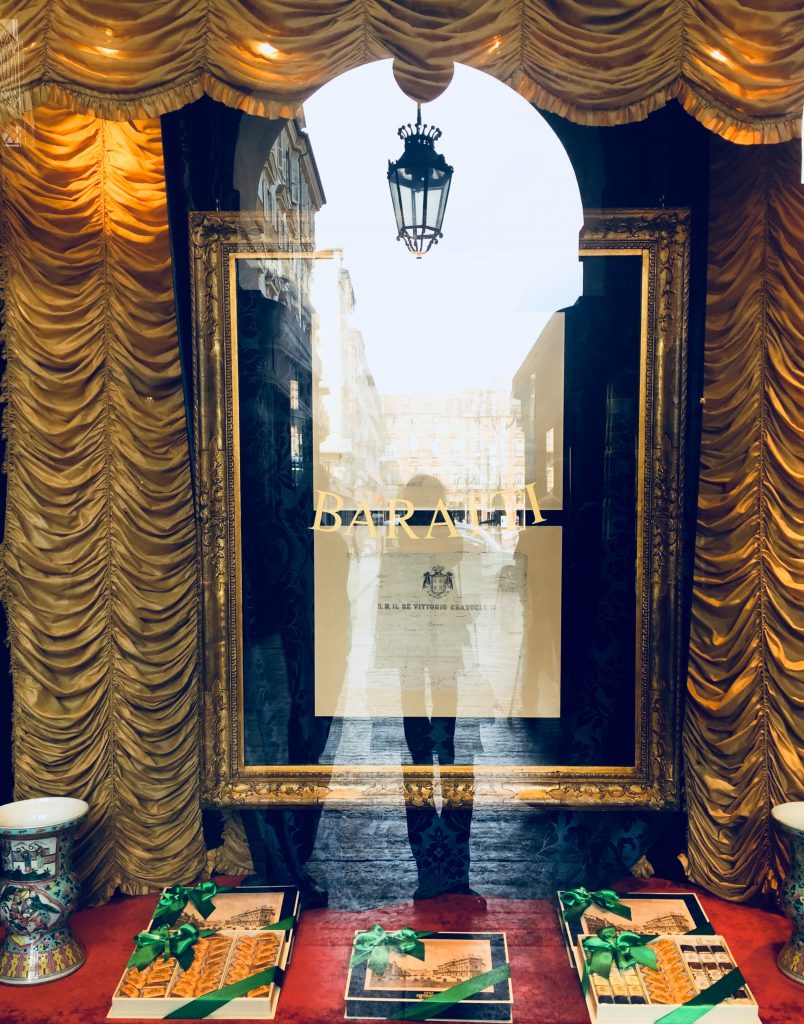 At the corner, turn right and cross the wonderful Galleria Subalpina, a walkway covered by a glass roof. Once again, you take a leap into the past. For those who like old books, there is a stop to make. 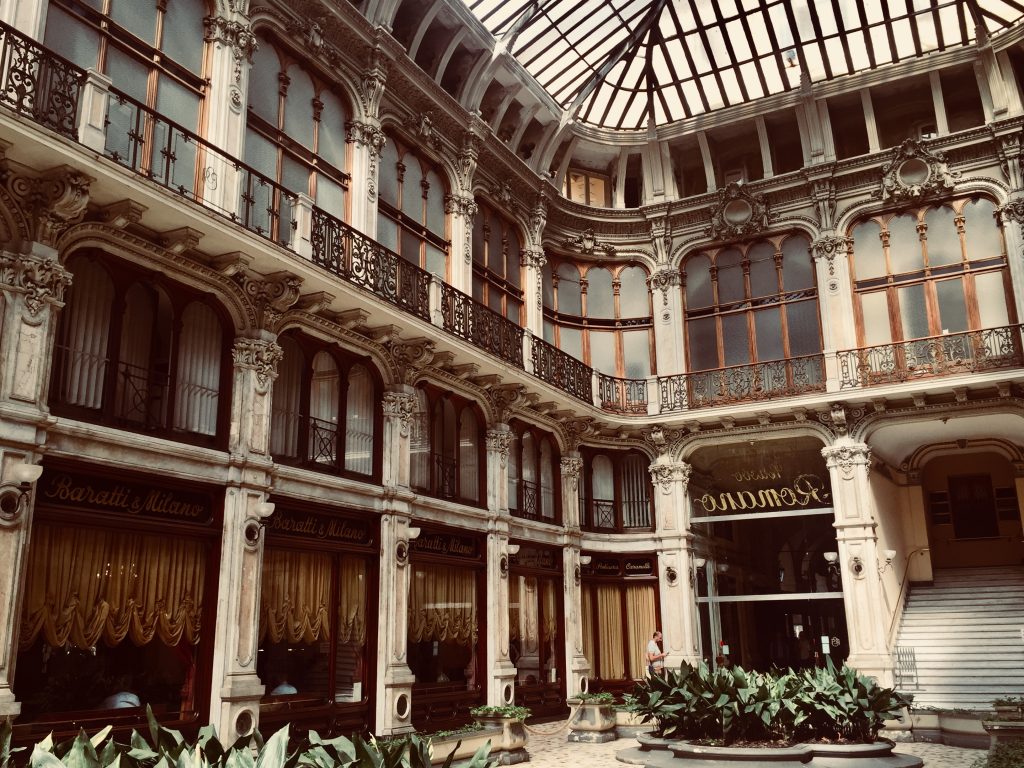 Via Po is the imposing street that, as its name suggests, takes you straight to the Po River. Before arriving at Piazza Vittorio Veneto, turn left onto Via Montebello. Look up and admire la Mole Antonelliana. The locals are attached to this symbol of their city. In addition, it hosts a fabulous museum of cinema. If you are a fan of the “pictures”, go for it without hesitation. Otherwise, take some pictures, go around it by following Via Gaudenzio Ferrari. There, you will probably meet a horde of students. Totally normal, you are at Palazzo Nuovo (quite ugly), where part of the university is located.

Take Via Po to Piazza Vittorio Veneto. No need to linger here for photos, you will have a much better view where I am taking you now. 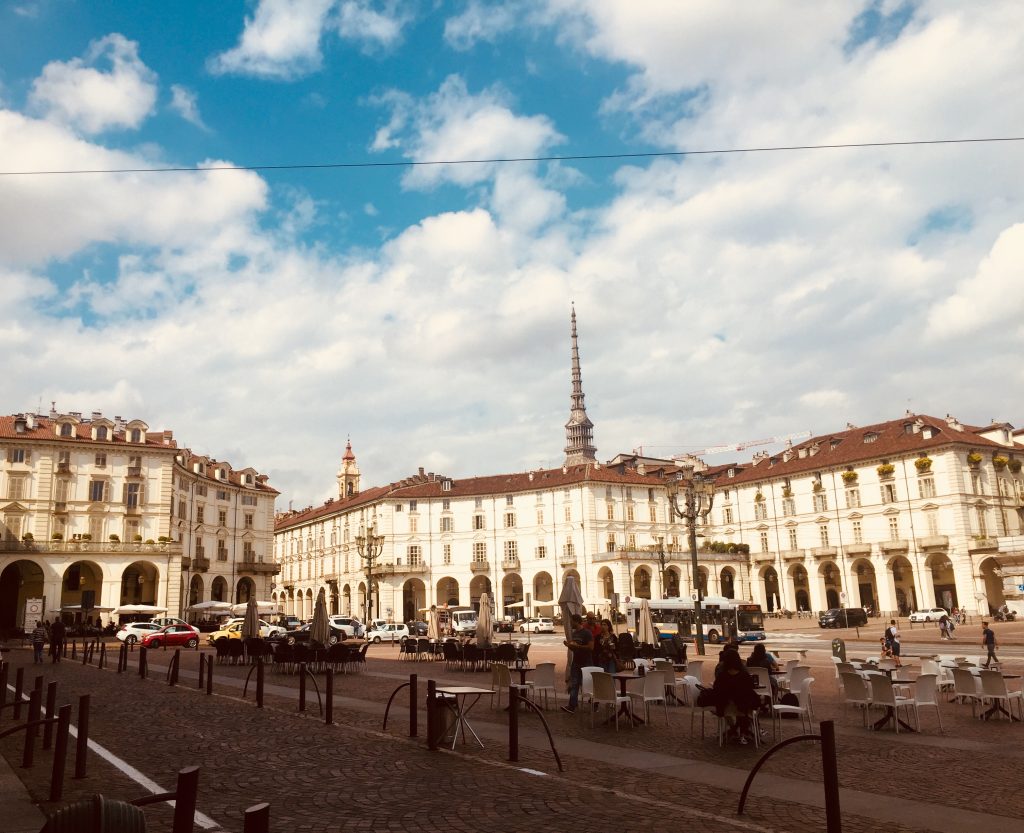 Cross the bridge. You are now in front of the imposing Gran Madre di Dio church. To its right, a trendy bar praised by the locals, called GranBar. Inside, the church isn’t extraordinary. But I would still advise in favor of climbing the stairs to reach the columns. From there, the view is really nice. It is not worth the view that you’d get from Monte dei Capuccini (accessible by car), but it is a good compromise if you don’t have a vehicle. 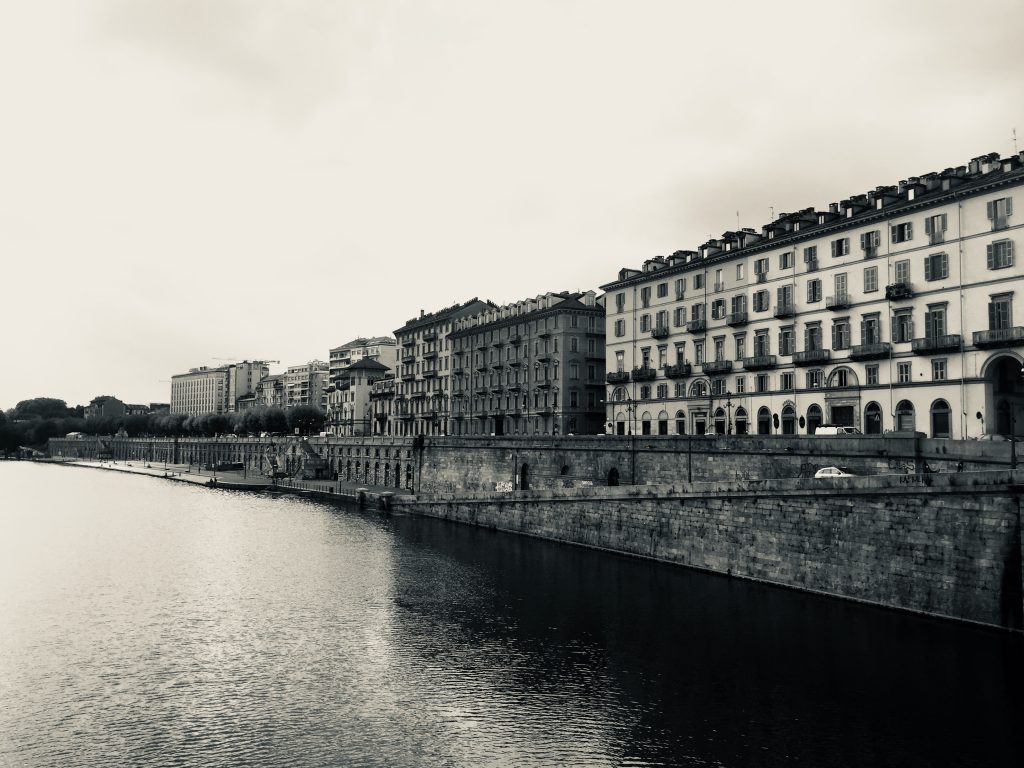 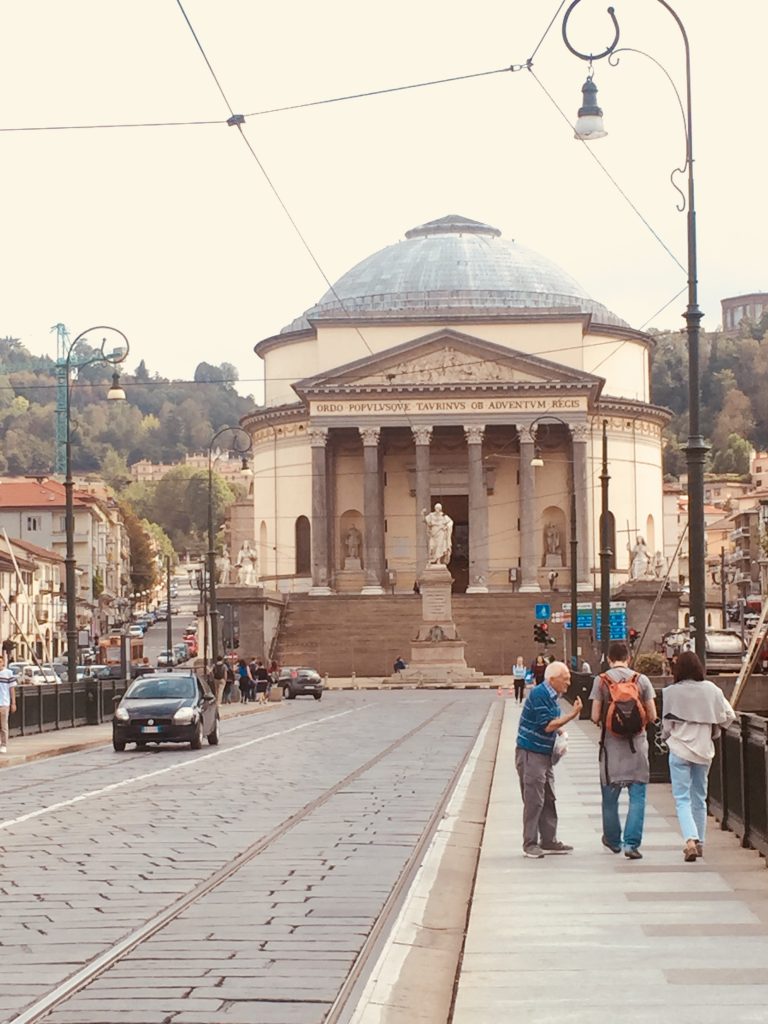 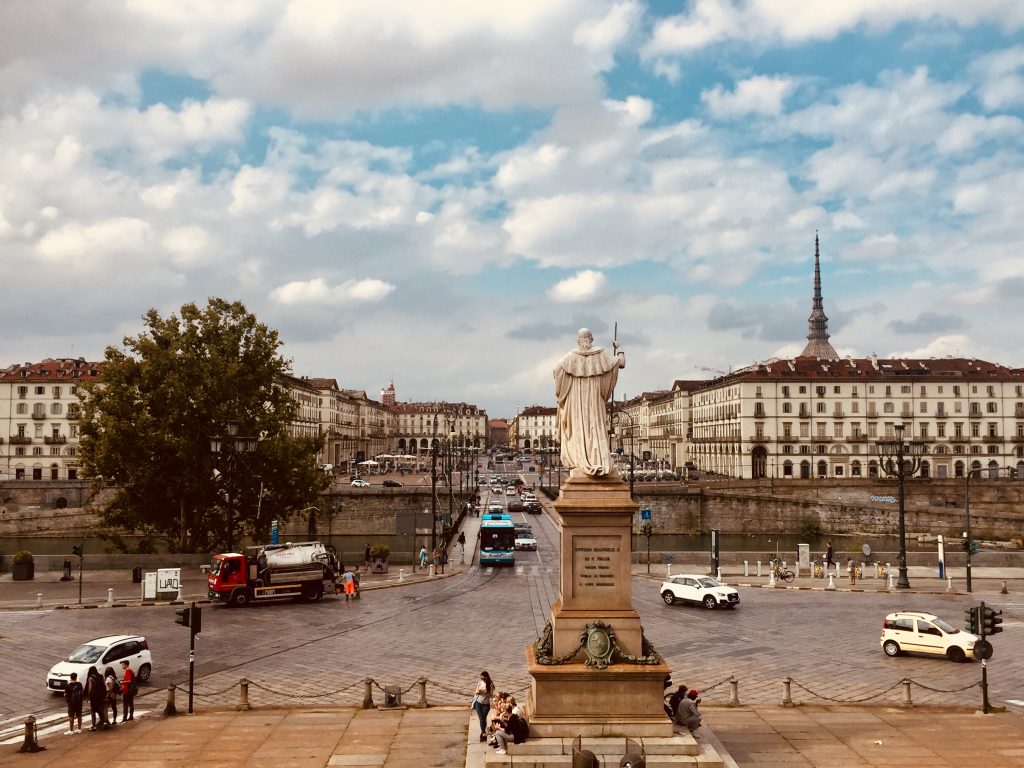 You must know that Turin is also known for its “Torino magica” tour, an esoteric itinerary around the city, at night, looking for symbols and listening to many legends. One of these legends has to do with the statue to the left of Chiesa Gran Madre di Dio, which is said to point in the direction of the Holy Grail. No less! 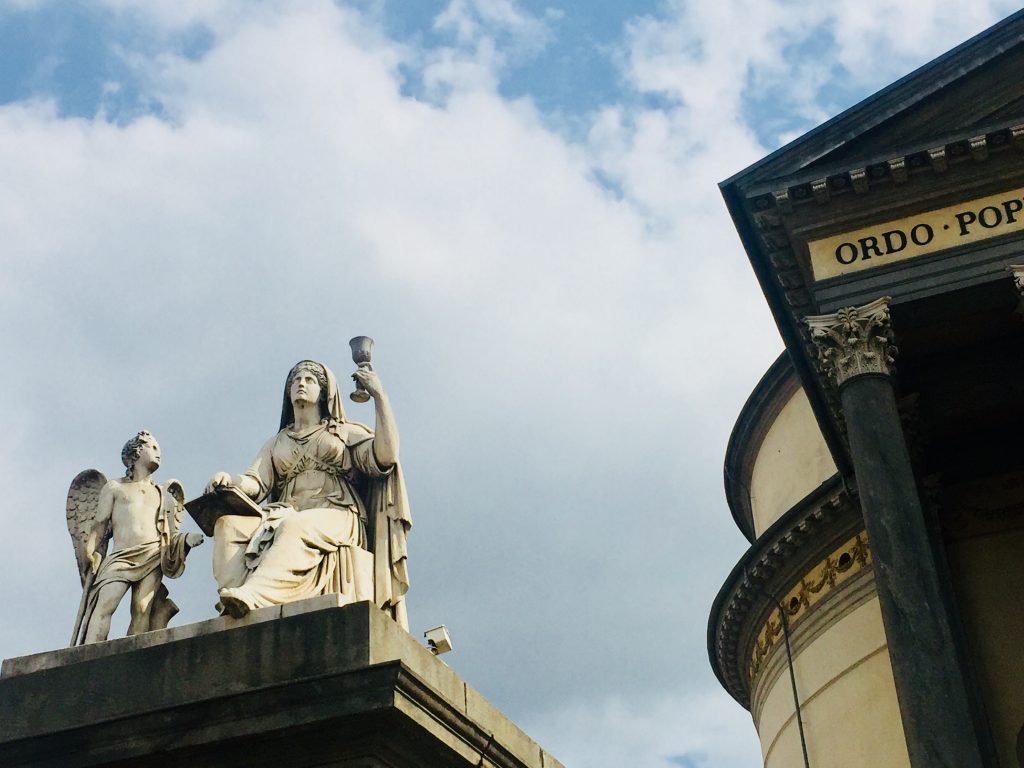 To complete your walk, go through the beautiful neighborhoods South of Via Po through Piazza Cavour, cross its park and finish with Piazza San Carlo before returning to your car.

We really hope that you enjoyed this “Turin in one day” itinerary. Please share your Turin experience with us. Either by sending us an email or simply by commenting on this post.

Need I even summarize? I would just say that, as you may have understood by now, I am enthralled by this magnetic and majestic city and in love with it.

My favorite moments in this itinerary: